Liquid chromatography (LC) is used for two different purposes: analytical work and purification – distinct applications which place differing requirements on the equipment and columns used. It is difficult to imagine a single system and columns perfectly designed to work perfectly in both roles. However, it is clear that recent technological developments have allowed flash purification to learn a few tricks from HPLC, to some extent blurring the distinction between the two. This kind of cross-over can only go so far, but commonality in the principles of operation means that cross-fertilisation is inevitable in purification applications – and as can be seen by the advantages of commercial products like Biotage® SNAP Ultra, Isolera™ Spektra and Isolera™ Dalton – invaluable.

The Two Forms of LC

Liquid chromatography (LC) involves the separation of a mixture into components based on partitioning between a stationary phase (typically a solid material such as silica or a polymer) and a flowing liquid mobile phase. With wide ranging application, LC is one of the most ubiquitous techniques of the analytical laboratory.

In liquid chromatography, the technique most chemists are familiar with is high-performance liquid chromatography (HPLC). This powerful analytical technique is ubiquitous in laboratories around the world, and a basic understanding of the mechanisms of separation is taught to undergraduates. Systems designed for this application involve high performance pumps, sensitive detectors and an often complex and powerful software suite to tie the components together. Separations are typically performed on expensive, reusable columns. Anyone familiar with a typical chemical QC or analytical laboratory will have seen HPLC systems in abundance.

However, analytical chromatography is not the only environment where LC flourishes, and for many years purification by LC has been a mainstay of organic synthesis laboratories, such as those in pharmaceutical and agrochemical companies. In a purification context, LC is used somewhat differently. Although high-performance preparative LC systems are available, they are expensive and relatively niche. Instead it is simpler and cheaper techniques such as flash purification that are more commonly seen. This technique involves a dedicated system where ease-of-use is imparted by a dedicated software focus on purification. Typically a simple pump is employed with a relatively low sensitivity UV, and disposable, one-shot pre-packed plastic columns are used.

Traditionally, analysis and purification by LC have been kept entirely separate, with dedicated systems designed for each. However in recent times there has been a blurring of this distinction between the two forms of LC. To most chemists, flash purification is a simple tool to convert raw reactor products into cleaned up samples ready for a further synthesis step or analytical study. To analytical chemists, flash is seen as a relatively quick and dirty technique compared to HPLC. In the past, these two very divergent forms of LC would rarely see cross-over, but with new developments the line between HPLC and purification is fading.

The use of expensive HPLC-type small particle size, high pressure stainless steel columns is not suitable for flash purification. Loadings on such columns tend to be small, and high flow rates or gram scale purification requires very large columns at pressure and costs that are prohibitive to most laboratories. Instead, cheaper columns with relatively high particle size packings are desirable, which can be disposed of after a single use to reduce contamination risk and solvent-intensive washing. As a result, flash purification has traditionally been performed using irregular silica particles that are large (around 50 μm) in size compared to HPLC packings.

Recently LC has seen a move towards spherical particles, smaller in size and to some extent mimicking the evolution of HPLC. These spherical media have many advantages in purification, giving greater resolution than irregular counterparts. Interestingly enough, this is not the major benefit of these columns. Although resolution is often the criterion of performance in HPLC, the desired goal in flash purification is high column loading.

Innovative spherical media with 25 μm particle size have almost twice the surface area of older column formats, leading to a vastly increased loading. This allows smaller columns to be used for the same purification, resulting in reduced solvent consumption, faster run times and less solvent evaporating after the purification. Also, these cartridges gives lower pressures than irregular materials due to the way in which spherical particles pack.

A traditional flash purification set-up employs a UV detector – a simple concentration detector revealing when a compound containing a chromophore is eluting from the column, but providing no further information about the actual nature of the compound. This is in stark contrast to HPLC, where dedicated information-rich detector techniques such as mass spectrometry reveal information about the composition and chemical nature of the eluting species. In flash purification, being seen as a low cost, simple technique, the use of such devices has previously been limited by their relative cost and complexity. As technological developments unfold and the cost and complexity of information rich detectors decreases, they have now become viable as tools in flash purification as well.

The first such advance was the inclusion of a photo-diode array (PDA) within a flash system. This allows post-run analysis of the separated components across the spectral range, with the ability to assess component purity after collection. Recently, flash purification has been taken to a new level with the inclusion of mass-detection. Mass-directed flash brings collection of fractions triggered by the detection of the m/z values of target compounds either entered manually or identified after a direct injection of the raw reaction product. 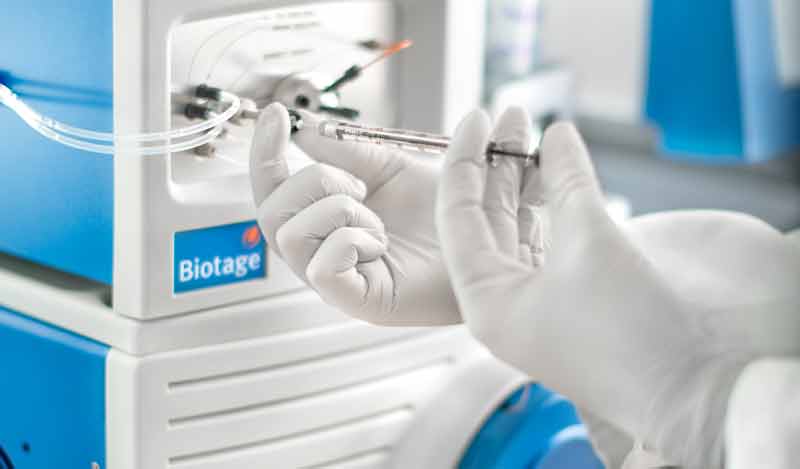 For more information of the Isolera™ series of instruments, Spektra and Isolera Dalton, download the brochure Biotage Flash Purification Systems – Pure Compounds in a Flash