Every chemist has been taught how to use and deal with glass columns in schools, so they have fundamental background experience. But unlike traditional normal phase flash, many chemists have little experience of dealing with reversed phase, and especially reversed phase flash.

Unlike normal phase chromatography, reversed phase uses a hydrophobic stationary phase (e.g. C18 or ODS) and hydrophilic mobile phases (methanol/water, acetonitrile/water). By converting the silica’s active, polar silanols sites to neutral, lipophilic sites, compounds that will either aggressively stick to silica or not stick at all can be retained, separated and eluted using water-based solvent systems. Thus KP-C18-HS is more like RP-HPLC than traditional glass column flash chromatography.

For that reason, it is sometimes difficult to visualize the best conditions to run or scale-up reversed phase systems, especially when transferring purification methods, where normal phase methods are typically used.

In this application note from Biotage, the unknown and the guess work is eliminated, and instructions are given exactly how to use flash columns for reversed phase chromatography. Three different scale up situations are modelled, including parameters for each one as a template for various scale up situations.

In this example 80 mg of a 4 component test mix was separated using a 12 g Biotage® SNAP KP-C18-HS cartridge. After equilibration of the column (using 4 CV of 20% acetonitrile in water), a standard reversed phase gradient was run using acetonitrile/ water. The same gradient and conditions were applied to larger cartridges on scale up (1 CV 20% Acetonitrile, 10 CV 20–70% Acetonitrile, 1 CV 70% Acetonitrile), using larger loads and with similar results. 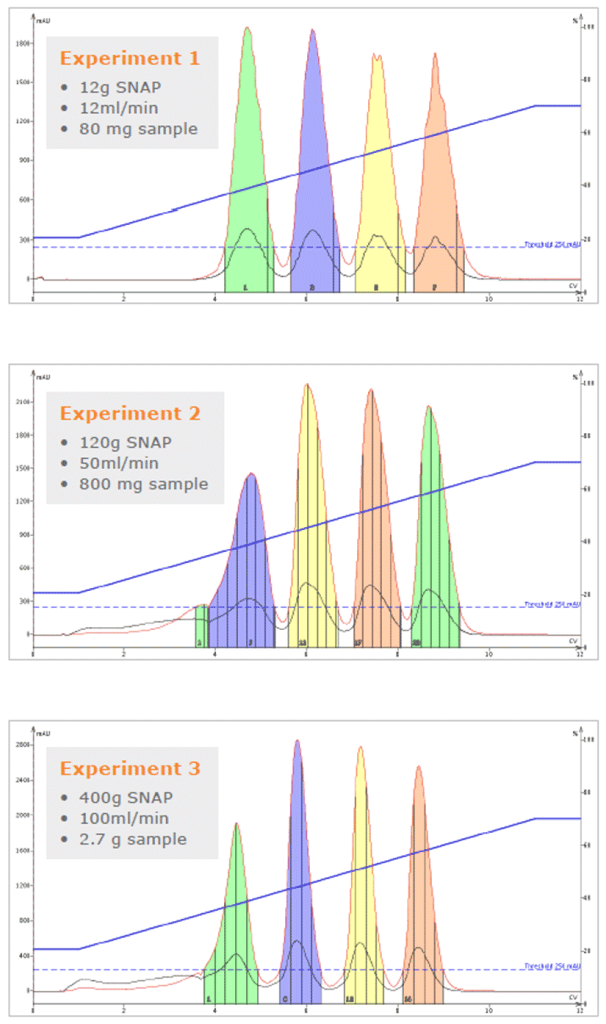 A typical starting point for reversed phase flash chromatography is a binary gradient, going from a low to high fraction of organic, typically with water as co-solvent. Before the C18 chains can be used effectively it is important to equilibrate the column, transitioning out of the dry state or organic storage solvents, and into a higher percentage of aqueous solvents to start the run.

We have demonstrated a 33-fold scale increase in both column and load during the reversed phase purification run, which enabled the separation of 80 mg–2.7 g. Typically reversed phase flash columns are loaded to 0.5–1.0% wt, but this is dependent upon sample composition. For easily resolved compounds, it is possible to increase loading to more than 1% by weight of silica.